En Koh Swe Yong, Secretary General of Parti Rakyat Malaysia and chairman of Parti Rakyat Selangor, today patrolled Taman Saga and met up with the local residents there, together with Ms Jenice Lee, who is the party's candidate for the constituency there. He made the following observations and comments.

He said that when approving such projects, the government had stringent requirements and the projects needs to be closely supervised during the construction period to ensure compliance with specifications and construction standards in order to prevent accidents.

However, looking our SUKE project involving the local residents at Taman Saga, it looks like an unplanned project. He questioned whether the authorities are actually supervising the works and ensuring that the works were carried out in accordance with the provisions of the local government and the Bureau of Public Works.

As a authority responsible, it is necessary to take actions to ensure that contractors construct while abiding by the regulations, and contractors must ensure that the safety of residents comes first. This elevated highway is one of the major projects in the state of Selangor and prevention is better than cure.

He said that projects like this one are going on in many parts of the country. Every time the government approves the project, the people often only know how much the project costs, but are not aware of the damage to the environment. We have seen that flash floods have recently occurred in Johor, Kelantan and Penang, and even in the region of Selangor.

He believes that people have the right to know. The government should disclose the impact of these projects on the environment as well as the consequences of implementing these projects.

He emphasized that the People's Party believes that there must be a balance between development and the environment so as not to sacrifice the future of our children for our current benefits. 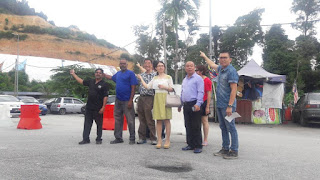